It is probably the first post-war mezuzah made in Sokolow. 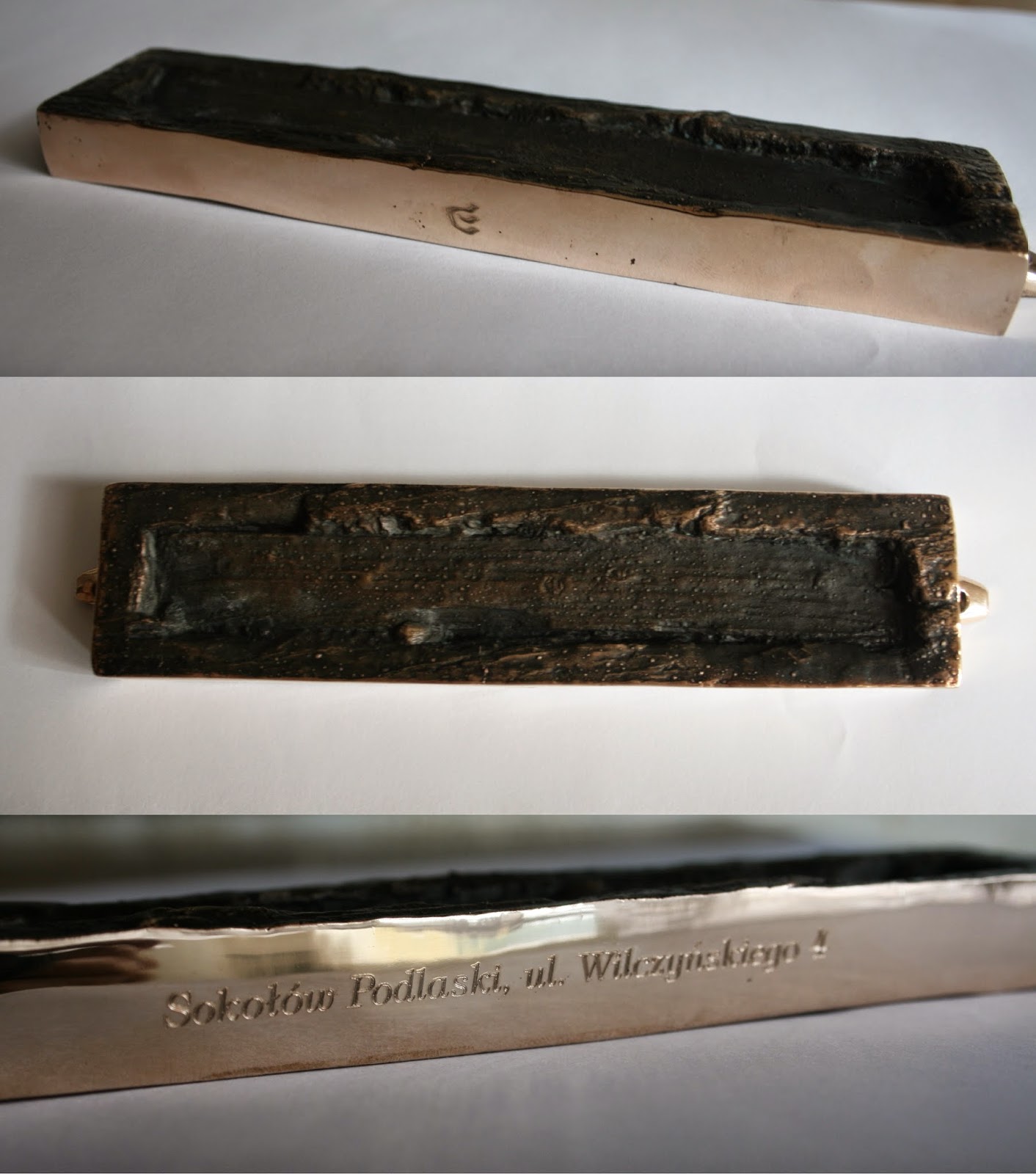 After World War II almost all Jews vanished from Poland. Only void remained. The signs of former inhabitants presence, typical for Poland, are marks of the mezuzot on the doorframes of the houses, now inhabited by new residents. These marks, holes are empty. Mi Polin team is making new mezuzot, which are casts of these traces. Cast in metal, commemorate Jewish life that was going on there years ago, fill the emptiness. If you put a scroll inside, it will give a new life to mezuzot, which don’t exist any more. The mezuzot tell stories about traces from different places in Poland and it will probably disappear during next years. In this way it brings about the memory of the people who disappeared and is a kind of message from the world, which doesn’t exist any more. The mezuzot from the past get a new life and can be real mezuzot again.
This one was made on 4 Wilczyńskiego (former Rogowska) Street.

Posted by Katarzyna Markusz at 10:32 AM No comments:

Project Synopsis:  This project is being initiated in order to fund the Yiddish to English translation of this 816 page book, Sefer ha-zikaron; Sokolow-Podlaski  (Memorial Book - Sokolow-Podlaski) for the Jewish Genealogical Society Yizkor library. 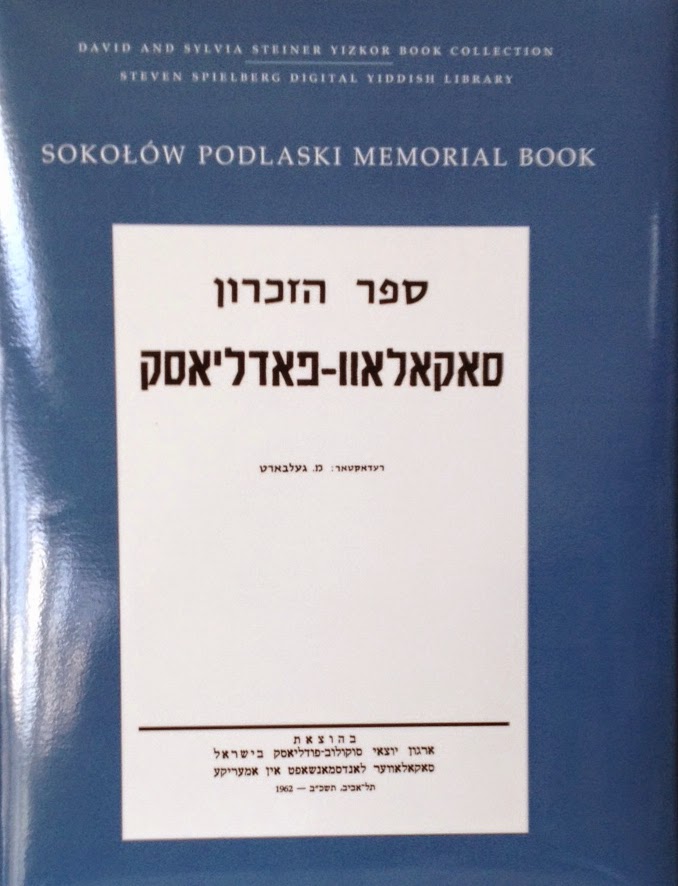 Based on an English translation of the Table of Contents, (which can be found at (http://www.jewishgen.org/yizkor/sokolowa_podlaski/sokolowa_podlaski.html), the book documents the history of the Jews of Sokolow-Podlaski, a small Jewish village located about 35 miles southeast of Warsaw, Poland.

Project Description
Many of the young Jewish men and women who immigrated to the United States from Sokolow-Podlaski in the early part of the twentieth century settled in New York, Chicago, Los Angeles, Paris and Israel.  In New York and Chicago, they formed groups that met regularly to maintain contact with each other and the families they had left behind. Today, their first, second, and third generation descendants know little of their Polish heritage and even less about the small shtetl from which their relatives came.  A primary purpose of this project is to fund the translation of Remembrances from Yiddish to English so that present and future generations of Sokolover descendants can learn about the lives, trials, and tribulations of their Polish forebears.

The Memorial Book - Sokolow-Podlaski is a yizkor book; five hundred of the book’s 816 pages are taken up with narratives about the destruction of the Sokolow ghetto, survival and death in concentration camps, survival in the forest, and life in the French Resistance, among other contexts which provided Soklovers haven. Twenty closely printed pages comprise a list of those murdered during the Shoah, another section contains eulogies to individuals whose survivors wanted to remember them in writing, and yet another section includes sponsored yizkor notices.  But if the book memorializes people, it also memorializes a place and a way of life.

The first three hundred pages of the Memorial Book is a section entitled “The Old Home,” that contains numerous vignettes of life as it was lived in Jewish Sokolow for centuries.  This section also includes information about political groups and civic organizations, including the loan and burial funds that were fundamental to Jewish communal life.  The memorial list and necrology that honor the memories of those who did not survive the Shoah enable readers to fulfill the commandment to remember and for this reason they are invaluable.  So are the descriptive and narrative sections of the book that enable us to remember the culture from which we came and, through it, to know who we are.   As those who survived the Shoah or heard about it directly from people who experienced it reach the ends of their lives, it is especially important that the details, the texture, of life as it was, be preserved.

The Memorial Book - Sokolow-Podlaski will interest people who have roots in Sokolow, and it will also interest scholars of pre-Holocaust Jewish Poland, the Holocaust, Polish history, and shtetl life.  With the recent opening of the Museum of the History of Polish Jews, non-Jews in Eastern Europe may wish for access to first-hand accounts of a history that is also theirs, and this book will provide them.

Memorial Book - Sokolow-Podlaski was written in Yiddish.  It is an important book that merits wide availability in English for the Jewish Genealogy Yizkor Library.  Anyone interested in supporting the translation effort, please access the JewishGen web site (above) to make a tax–free donation.  As the translation proceeds, sections will be posted as they are completed.