My dad,Ze'ev Tzudiker studied Torah with Mendel Morgenstern in the "cheder" in Rabbai Zelig Morgenstern"s Yeshiva. They were good friends until they grew up, My dad had to leave the "chder" and start working to help the family and Mendel was sent to study in the great Yeshiva of "Chaachmei Lublin". 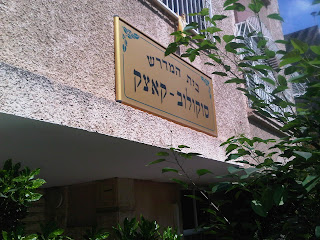 Two years ago I arranged a meeting between both of them. They were excited to see each other. They were both in their 90's already but looked like small children again.

Here 's what I wrote about what the Rabbai told me-

The meeting between my father and the rabbai was so emotional that I could hardly speak.The two spoke and spoke and for a short time became small children in the cheder again. I will certainly need another meeting with him to complete the whole picture.

Rabbai Mendel Morgenstern is a charming nobel person and his wife too .He is now 90 years old and he has his own Yeshiva which is called Sokolow-Kotzek beit-midrash . (He is the grand-grandchild of the Great Rabbai of Kotzek)

He told me he survived the war by himself. As his grandfather told him,he ran away from Sokolow to Wilna,stayed there for half a year and then it was conquered by the Russians again,which enabled him to escape . He flew to Japan,wandering to India and China and then in 1942,came to settle in Israel. He had another sister who was the only one to survive the war out of the 19 people they were.his sister,Pearl,passed away last year.

The Rabbai and his wife have 7 children- 5 girls and 2 boys .

I sked him about visiting Poland and he said he wouldn't ever step his leg on this land. he said that the Poles were always as antisemic as the Nazis . The relationships between Jews and non-Jews in Sokolow were tense and a lot of times the Jews were victims of Pogroms.

He also told me that because of his grandfather's reputation in religion.Sokolow became a Jewish central place to which students from all around poland and even from abroad came to study in his Yeshiva.

It turned out that everything my father remebered and told me was very accurate. He confirmed to me the fact that there was a small jail in his grandfather's house. He also confimed the fact that his grandfather practiced medicine . When I asked him did he study medicine,he said that one of his grandfather's students was adoctor- and they had an agreement. Rabbai Zelig M. taught him talmud Torah and the doctor taght him medicine. He used to make accurate diagnosis better than official doctors. He was very self- confident about his observations. The farmacy in town respected his medications .

Hecame home to Sokolow the evening before the war broke out (it was Thursday,the 31th of August).His Parents prepared him a hiding place in the Boidem full with sand and intended him topractice going into it in case a war starts for the next day but the bombs came earlier than expected, the next morning before 7 ocloc'k while he was still in bed.

I showed him pictures I took of Sokolow in my visits there and also kasia's pictures of her exhibition. I told him about our group and our intentions. He listened curiously but said nothing. He looked in a great pain. 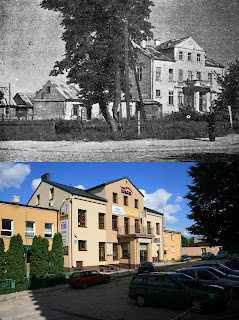 The Rabbai published his grandfather's writings. He wrote 2 books- She'erit Itzchak and She'erit Israel which deal with religious matters.

May his soul rest in peace.

Posted by Katarzyna Markusz at 12:24 PM No comments:

Rabbi Mendel Morgenstern, grandson of Sokolow rabbi Yitzhak Zelig Morgenstern, passed away today at the age of 92 in Bnei Brak, Israel. May his sould rest in peace.

Posted by Katarzyna Markusz at 8:24 PM No comments: