Any chance any of you know where this tombstone is? What city, what place?

It's a picture from the Yizkor Book, but there's no caption. 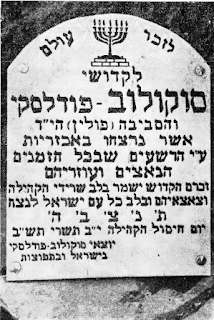 Posted by Katarzyna Markusz at 3:48 PM No comments:

Have you ever heard of Cyla Fuks (?) from Sterdyń near Sokołów, living in Tel Aviv, 227 Dizengoff Street? In 1967 she wrote z letter to her former neighbour in Sterdyń. She wrote there about succeses of the Israeli army - and that is why the letter was confiscated by Polish police (Poland was then controlled by Russia and Russia was against Israel, that is why it was baned to talk/write anything good about Israeli army).

I wonder if Cyla left any written testimony about her life in Sterdyń before and during the war. Please, let me know if you know anything about her! 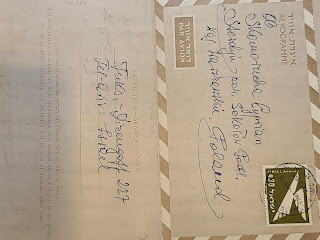 Posted by Katarzyna Markusz at 5:32 PM No comments:

Do you remember Pinchas Ogrodnik, whose tombstone we found in Sterdyń? He was a young boy who got involved with the communist movement. He received communist leaflets from a stranger (he said that in the court, I don't know if it's true, probably not). Communism was a serious crime back then, as the Bolsheviks attacked Poland in 1920. The authorities feared treason. Pinchas was sentenced to 2 years in prison.

What is important - there were a few Poles and a few Jews in the group of suspects. It was NOT "Judeo-communism", as anti-Semites sometimes claim about communists.

In the personal questionnaire (written by a policeman) Pinachas stated in the education column "I can sign my name, but not much more". His parents were: Icko-Moszek and Chaja-Sura nee Nejer.

Pinchas spent 349 days in prison before he died (possibly from tuberculosis, but we have no confirmation of this). Officials noted that he still had 381 days to serve.

Posted by Katarzyna Markusz at 5:27 PM No comments:

Today we commemorated our Jewish neighbours who on September 22, 1942 were murdered by the Germans and their co-perpetrators on the streets of Sokolow. We read testimonies of Aaron Elster, Golda Ryba, Simcha Poliakewicz and Josek Kopyto.

Thank you all who were there today! 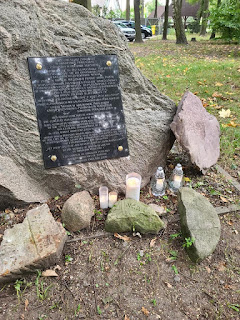 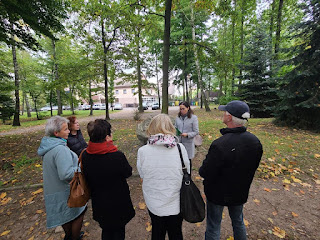 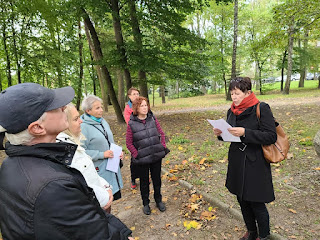 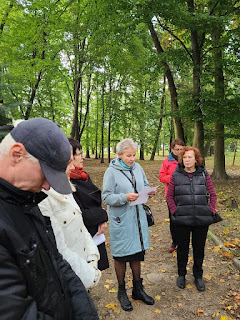 Posted by Katarzyna Markusz at 7:22 PM No comments:

A report on war losses

The Polish government a few days ago presented a report on war losses, demanding reparations from Germany. Imagine, that  (among other things), the Polish government wants compensation from the Germans for the Jedwabne pogrom! In the report they also write about Sokolow.

In the report, Mr. Rafal Dmowski of the University of Siedlce (I don’t know who he is) described on two pages the losses of Sokolow during the war. He was wrong basically on all counts.

He wrote about the "almost complete destruction of the town center" in September 1939. Well, no. Kupientynska Street was destroyed at the beginning of the war, and that's where the photos of burned-out houses come from. The town center - houses, church, town hall - survived, and later the Germans created a ghetto there. Massive destruction occurred in 1944, when the town was bombed by the Russians, but there is not a word about this in the report (why???).

We further read that during the war "a temporary detention center was established on Magistracka Street." Apparently so, but Magistracka Street was named Magistracka in 1944 already after the end of the war. That's because a magistrate was organized in the building of this "prison" - a pre-war Jewish house of prayer - in connection with the bombing of the town hall at the corner of Siedlecka and Dluga Streets by the Russians.

Then we have the information that "before the outbreak of war, there were about 4,000 Jews living in the town." Wrong again! According to statistics from the Central Statistical Office, in 1921 Sokolow had a population of 8055, of which 4430 people declared themselves to be of the Jewish faith. In 1931, out of a total population of 9918, 5027 people declared being Jewish.

In the next sentence we learn that "the Germans proceeded to liquidate the ghetto on September 30, 1942." Another untruth. It was September 22, 1942, a date I learned with certainty, and since 2011 I have been organizing commemorations on that day, as Mr. Dmowski studying in Siedlce should have known. Just as he should have read our translations from Yiddish to Polish of the memorial books - available for free on the internet!

So dear friends this whole report has nothing to do with history, but rather with propaganda.

Posted by Katarzyna Markusz at 5:47 PM No comments:

Today at the Jewish cemetery in Sterdyn I found this tombstone. It is written in Yiddish, which is unusuall. The reason for that may be that the person here was probably a leftist. I will try to find out more about him but maybe any of you have more information?

Here lies the deceased companion OGRODNIK Pinchas. He died after a long time in prison in Siedlce. He was born on August 1, 1902, died on April 30, 1926. 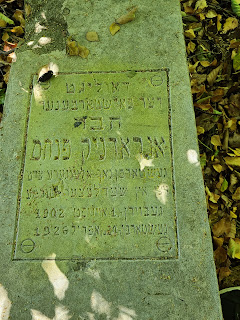 Posted by Katarzyna Markusz at 9:52 PM No comments:

Rasia/Rasza Sztutman passed away in November 1883. Her father was Josef/Josel. Thanks to collective work we were able to connect her tombstone with her death certificate from the Siedlce Archive. 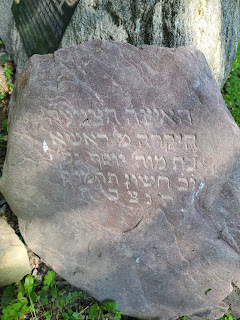 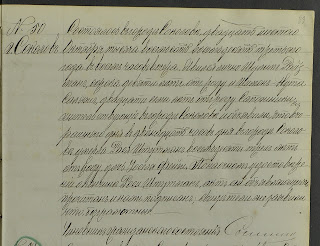 Posted by Katarzyna Markusz at 10:04 PM No comments: