Chana and Shepsel Grynberg had two children, Icchak and Sara. Chana’s sister, Shoshana Rafałowicz, and her husband  Pinchas were children and loved Grynbergs’ kids as their own. Before the World War II both couples owned mercer’s shops in Sokołów Podlaski which they ran together. Their frequent clients were Józef and Lucyna Fink. Józef was director of a primary school in nearby Czekanów. In time they all became good friends.

In the fall of 1940 the Nazis established ghetto in Sokołów. They brought Jews from Kalisz into it, since the latter town had been included into the Third Reich and no ghetto  was organized there. Because of overcrowding, the Grynbergs gave their apartment to some Jews from Kalisz and moved in with the Rafałowicz family.

Email ThisBlogThis!Share to TwitterShare to FacebookShare to Pinterest
Labels: jewish, Righteous Among the Nations, sokolow, testimony

The stones in Treblinka 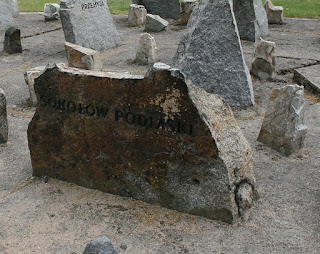 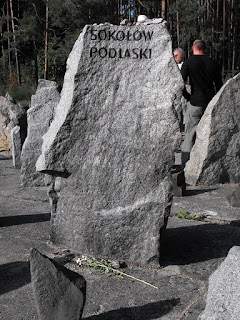 Posted by Katarzyna Markusz at 12:48 PM No comments:

Yakov Mendel Morgenstern, son of the Sokolower rebbe, was the rabbi of the Great Synagogue in Węgrów. On erev Yom Kippur in 1939, just a few weeks after the Germans captured the town, SS officers invaded his home. Reports of what happened next differ slightly in details, but the tragic outcome is the same. 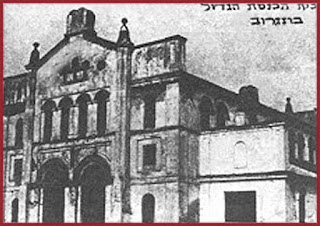 The SS officers dragged Rabbi Morgenstern to Market Square in the center of Węgrów and ordered him to undress. Then they gave him a broom and demanded that he gather the manure in the square (which was plentiful, as horse and buggy was the prevalent mode of transportation in Węgrów) and carry it to the town dump in his shtreiml [fur hat].
As the rabbi tried to do what he was told, he was stabbed with a bayonet. What happened next is not certain. Either the initial bayonet went into Rabbi Morgenstern's abdomen and he died immediately or he was tortured by several bayonet thrusts and died while he was working.
After Rabbi Morgenstern was murdered, the Great Synagogue in Węgrów was closed. It was destroyed by the Nazis.
Posted by Katarzyna Markusz at 9:32 AM No comments:

Out of the Past

We just returned from a trip to Poland, a trip to Sokolow Podlaski, a trip to the past.  What past was it?  It was my family’s memories past, the town’s past, Poland’s past.  A trip to bridge the pain and losses of the past, a trip to find signs of and links to those we lost and those we never knew and a trip to look for signs of hope that the suspicions and hatreds and abuses of past times could be overcome and new bridges built. 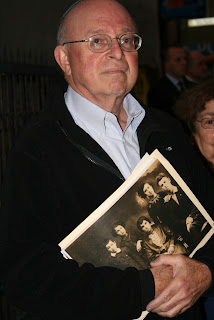 My family had lived in Sokolow for generations.  They were born there, grew up there, walked the city streets and countryside, made friends, got married, had normal lives.  My father and mother were only in their early 20’s and were sweethearts  when Germany invaded Poland on September 1, 1939.  They were in the town when it was bombed, and they were there when the German army invaded Sokolow on September 10, 1939.  Beatings and abuses of the Jews rapidly escalated and when my mother was attacked, she and my father decided they had to leave.  During a short period when the Soviets pushed the Germans back, my father got a horse and buggy and took my mother, her sister, her sister’s fiancée, and their mother and fled across the Bug River to Drohiczyn, to Russian territory.  His mother, his sister, and two brothers and aunts and uncles refused to leave reasoning, “How bad can it be?  Where can we go?  We know no-one in Soviet Russia.  How would we live?”

Read more »
Posted by Katarzyna Markusz at 8:56 AM No comments: