A few words about Treblinka


Ceremonies commemorating the 70th anniversary of the liquidation of local ghettos are organized in many cities in Poland this year. In 1942, hundreds of thousands of Jews from many cities were deported by the Germans to the Treblinka death camp. How many events will the Museum of Struggle and Martyrdom organize in Treblinka? The same number as every year - none. 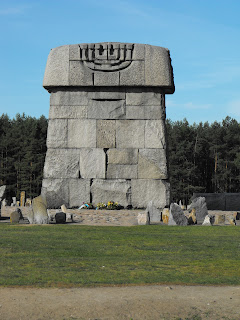 Treblinka Museum is located in Sokolow Podlaski County and Sokolow is my hometown. I cannot say that I visit the museum very often because there is no shuttle service that could drive me there. Without your own car you won't be able to get there. It's a pity, because in my opinion, even in the so-called tourist season, a small bus could go there even once a day back and forth, maybe only on weekends. However, somebody would have to care about that and apparently nobody does. But I do not want to talk about this...

I have a friend who wrote a book about a man who survived several camps including Auschwitz and Treblinka. Many years after the war that man committed suicide. The author of the book knew him well because they were neighbors. In his work he used testimonies written and published in Yiddish in DP camps. These publications were not previously known to people at the Treblinka museum. Interesting? Not at all. The author of that book was invited to Krakow to share this story with the participants of the meetings at JCC and the Jewish Cultural Center. He wanted also to come to Treblinka and organize such a meeting there. Unfortunately, he does not speak Polish. So he asked me to intercede. When I asked the director of the Treblinka Museum if such an opportunity would be possible, I heard only "no." Why not? I quote: "He is Jewish, and you never know what they really want." I know the director of the museum personally, so maybe he thought he can be so honest with me? Maybe he thought he can talk to me that way? If so, he was wrong, and I began to observe, from a distance, what is happening in Treblinka. And what did I see? Terrifying emptiness.


When I was still in school, I was never on any trip to Treblinka. Such trips were not organized. None of the museum staff ever came to school to teach the pupils a lesson on this topic. Times have changed, but this custom not very much. Some local schools are going there, but that's still not enough. Recently, I taught at a school in Wegrow district (Sokolow and Wegrow districts were merged into one during the war and Treblinka was located in it). I asked the students: When were you last in Treblinka? Never. And did anyone from the museum staff came to your school to have lessons with you? No way!

When we enter the museum web site we will see a series of meetings and events that took place there. You should know that the museum is NOT the organizer of almost any of them, only generously provides its space.

For years, in September, memorial ceremonies are held at the former labor camp in Treblinka. It commemorates only the sacrifice of Catholic victims of the camp, forgetting that the Jews were sent here as well (at Treblinka there were two camps separated by a kilometer or two - a death camp and a labor camp). The Museum gives the impression of organizing but in reality it is the organist from a nearby parish, which was clearly said by the bishop at the last meeting. None of the participants put flowers or lit candles on the huge Jewish tomb which is located nearby.

The situation is different during youth meetings with Israeli and Polish students, organized by the governor of Mazovia in October. There were two such meetings. "I am not an organizer, ask the organizers," the museum director told me when I asked him about the event. Celebrations were held at the former death camp. Participants earlier laid a wreath at the labor camp, and also paid tribute to the victims at that camp. The difference between these events, the one a month after the other, is huge to me.

This year the museum organized two exhibitions. A few works were shown there. The words "a few" should be underlined. And what's next? Probably nothing. I have the impression that the museum staff don't do anything on their own initiative, simply because they do not have it. They do not do ANY research, do not go to meetings with young people, do not go with their own ideas to the people who live here. And this is so necessary that only a blind man wouldn't notice that.

What, then, are the people who work there doing? I have no idea. I once spent a long day there. Besides me, there was one museum employee who was reading a gossip newspaper the whole time, and making tea from time to time. In the end, she had to be awfully bored even with that because she sat next to me and, after a short conversation about nothing, she confessed that she is unhappy because she can not have children ... This wasn't the information I expected to find in the state museum.

Well, they don't organize anything, but what about the museum's archive? It is there, but not available to everyone. My friend wrote a work related to Treblinka. She asked the director for access to testimonies that are in the museum. He gave her testimonies number (now I'm guessing the numbers, but this is not so important) 3, 5, 8 and 17. And what about the others? When she admonished him, she heard that there is nothing interesting for her there. She could not, unfortunately, decide about that herself. The director of the museum did it for her. And what about the first memorial book of the museum? The one to which subscribed guests attended the opening of this facility? I heard quite by accident of its existence. And also it is not available to the public. For whom, then, is all this available? And who should it serve? Well, who?

The last idea, of which the museum is not the organizer, but it kindly agreed to it, is staging parts of the musical "Korczak" in Treblinka. When I asked director of the museum for details, he said he spoke with a "person of the community in Warsaw" (he meant the Jewish community, but the word Jews hardly passed his keyboard during his conversation with me; he prefers the term "people who adhere to Judaism," which I think is meaningless, because you can be a Jew and don't adhere to anything). So I asked the chairman of that community, who as it turned out did not know anything about the alleged consultation. I still don't know the name of the mysterious "person" and I will probably never know it. Since then, however, the director of the Treblinka museum stopped talking to me and didn't invite me to the second of the exhibitions I mentioned earlier. Oh well ...

Let's go back to Sokolow. Near Piekna Street there is a mass grave from the Second World War, in which the last Sokolow Jews were buried. The plot was sold several years ago to a private owner who built a house there (!). Several years ago I was still in school and was interested in different things, but not in local history, about which I knew very little indeed. But the director of the Treblinka museum went to the site where that house was built. He says that he saw bones in the ground (strongly emphasizing that he does not know whether they are human bones or not, because he is not an expert). He said there was a friend with him who was taking pictures. But he does not give the name of the friend, and says he doesn't have those photos anymore. I ask: "What did you do then? Who did you call?" I hear in reply: "What could I do?" I know what I'd do. Knowing that I'm standing on the spot of mass grave and seeing the bones dug up, I'd call the police. I do not know if it's a good move, but it would be the first that in this case would come to my mind. I do not know whether human bones could be confused with any others, because I'm not an expert, but I think the police would know that without any doubts. Meanwhile, no one did anything, the house was built and everyone is happy.

And everyone will be happy when it comes to the musical in Treblinka. Because that war was a long time ago, we don't know whose bones these are, there are no Jews, why dig it up, deal with it, and who cares at all...

I published this article (in Polish) on my facebook wall and then on jewish.org.pl. I asked my lawyer is everything OK with it. She said it is.

The director of the Treblinka museum saw it on jewish.org.pl. He decided to write a comment there. He said I'm a liar and he can prove it. Unfortunately, he didn't. Instead he sent a link to this article to his friends asking for support. And then my nightmare started.

Friends of the director laughed at my skills and education. Deputy director of the History Institute at Siedlce University said I probably studied at Ulan Bator (what he saw as an insult; I've studied at Warsaw University). I could read there how bad a person I am. For sure I have something on my mind. Maybe it's a kind of conspiracy against the museum and its wonderful director. Jews supporting jewish.org.pl should apologize now. For what? For what he said about my friend: "He is Jewish, and you never know what they really want." I guess the author of that comment blames Jews for those anti-Semitic words. Interesting.

A policeman who worked some time ago during the visits of Israeli tours of Treblinka wrote openly on my facebook wall that he heard anti-Semitic comments from director of the museum at many times. He was surprised that such a person could work in such a museum.

A member of the director's family (or somebody who by accident has the same surname) sent  messages to me and my friends.

I'm sure the director of the Treblinka museum was very nice to many visitors. To me he was also nice. But being nice is not enough. If you work in such place you must be professional on every level. And you can't allow yourself any anti-Semitic comments. Not even once!

My friend said: "Former death camps are forgotten by the rulers of these places. And forgotten by the Ministry of Culture and National Heritage. Of course - it's easier to resent because of "Polish Death Camps" than to do something towards preserving the memory, honor those who were murdered there, educate ..." And I completely agree with her.

A few days after my article, the governor of Mazovia decided not to let the musical be staged in Treblinka.
Posted by Katarzyna Markusz at 9:29 AM