Soon I will publish the first part of the translation from Yiddish into Polish of the Sokołów Podlaski Memorial Book. Since there is no monument dedicated to Jewish inhabitants in the town, this translation is a kind of virtual monument. Thanks to this, young people in Sokołów schools and adults can learn something about the history that they will not learn at school or from the town authorities.

In order to be able to translate the second part of this Book next year, we need your help. Therefore, each person who pays PLN 500 or more for this project (this money will be paid entirely to the person who translates the text into Polish; I cover the rest of the costs of this project myself and I work on it for free) will receive from me by e-mail a high-resolution (10349 x 6510 pixels) Sokołów map from 1925 in jpg format. As the fundraising site https://pomagam.pl/sokolowpodlaski does not provide me with your e-mail addresses, please contact me after making the payment so that I can send you a map. 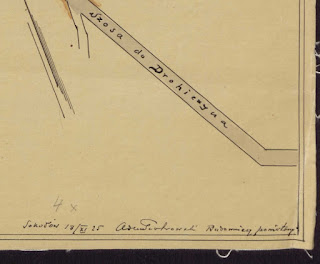 Posted by Katarzyna Markusz at 4:51 PM No comments:

This year we didn't organize a ceremony in Sokolow but instead we organized a virtual ceremony on zoom. We are all Sokolowers - in Poland, Israel, US and even in Wien 🙂

Thank you all for being here today! 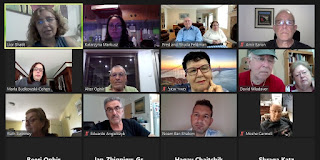 And watch a video about Jewish history of Sokolow!

Posted by Katarzyna Markusz at 7:49 PM No comments:

In Sokołów, he founded the Mizrachi-cheder (he was a teacher) at Niecała Street in the house of Alter Bekerman and was active in the Zionist organization. 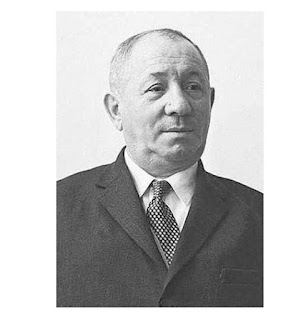 Posted by Katarzyna Markusz at 6:06 PM No comments:

Here was the Secondary School No. 2 in Sokołów - the Polish Folk School for Jewish Children. 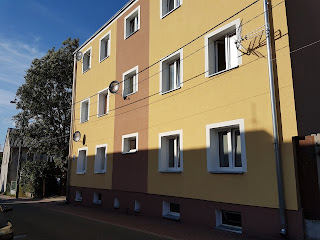 Moshe Zając recalled: "School number 1 was for Christian children. The curriculum of both schools did not differ in any way. School number 2 was, however, open on Sundays, and not on the Sabbath. Polish patriotic attitudes were not any weaker in the Jewish school than in non-Jewish one. It was thanks to the teachers who were completely assimilated and did not want to even hear about Jewish problems. The headmaster [Icko] Trumper, teachers [men] Grinberg, Gompl, Wachsberg, teachers [women] Steinerówna, Malewonczyk were staunch assimilationists. Trumper, Gompl and Wachsberg had leftist views and were opposed to Zionism. They had a great influence especially in the upper classes in the school. The school was the first to guarantee a general normal education.

The children at school felt very well, despite the strict headmaster who often pulled the students by the ears. The children liked their own school very much, a school for Jewish children only. Its great importance became even more apparent when the school was shut down a few years before the war. Jewish children had to learn alongside Christian ones. Oftentimes they returned home crying because of insults  or even beaten up by their Christian colleagues. Anti-Semitism directed against Jewish children was as strong as the one directed  against their parents.

I remember the Polish patriotic celebrations on May 1 or the special celebrations that took place in Sokołów on the occasion of the unveiling of the statue of Father Brzóska (a Polish patriot, hanged by the tsarist authorities after the uprising in 1863). There were no Jewish celebrations at school, but Jewish children took part in Polish ones en masse. All school children came to the unveiling of the monument. But the town officials did not even look at us and didn’t give us a special place. When the Christian children were brought to the church for the solemn mass, the teachers of the Jewish school saw fit to bring the Jewish children there and lined them up in rows in the square in front of the church. There, we heard the well-known shouts: "Jews to Palestine," and Christian children spat on us.

After the whole ceremony, when the peasant orchestra had stopped playing and all the Christian children and other institutions started to leave, only then did we go to the monument and lay a large wreath on behalf of our school. Even today I feel the taste of insults to which our assimilated teachers did not react.

Despite this, I think of them warmly, because they were the first to give us a taste of secular education and further learning."

We would not know this story if it were not for the translation from Yiddish into Polish of the Sokołów Memorial Book. In September, we will publish the first part of this book on the Internet for free. This is a very important and necessary project that you can support here https://pomagam.pl/sokolowpodlaski Without your support, we will be unable to translate the next parts and we will not know other stories like this one.

Posted by Katarzyna Markusz at 7:38 PM No comments:

Have you seen "The Umbrella Academy"? In season 2 you can see Jack Ruby. As you - probably - know his father emigrated to the US from Sokolow or Kosow Lacki. Well, maybe we won't be proud of Jack but it is interesting to know that. 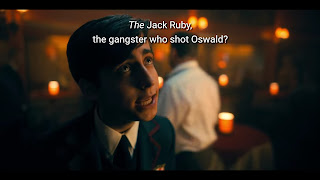 Posted by Katarzyna Markusz at 9:32 PM No comments:

10 years ago I visited an older gentleman in Sokołów who showed me a letter written a few decade ago. The letter was about oranges, the sun that shines somehow brighter than in Poland. It also said that "Szmulek and Grynszpan, who worked in the mill, have already gotten married, they do not live in Tel Aviv and we do not see them any more."

Then I "met" the author of this letter in the archives. I discussed the post-war efforts of this family to recover their property in Sokołów during the autumn research conference at the Jewish Historical Institute (I write about it in the article that I hope will be published in the conference book this fall).

And this week, at the ulpan of JCC Krakow, I have met a cousin of these  people. The author's daughter lives in Israel and - despite her age - is doing great.

I am writing that to say that everything is connected (and that - this is my old theory - everyone has something to do with Sokołów). And the fact that such things have a deep meaning proves that it is worth to take interest  in local history. Every time I manage to put together this type of historical puzzle, I am the happiest person in the world. 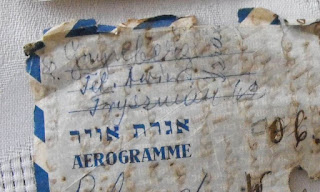 Posted by Katarzyna Markusz at 11:27 AM No comments:

As you probably know, this year we are translating the Sokołów Memorial Book (its first 200 pages). This book is in Yiddish, but the copy we have (from the Yiddish Book Center, the same is on the New York library website) has the wrong page number 58. Someone must have made a mistake printing this book because this page is in Hebrew and does not apply to Sokołów, but to some other town.

Is this book in your collection and also has such a wrong page? Or maybe you have the correct page number 58? Let us know!

Attached is also page 57 (this one is ok) just to show you what we are looking for. 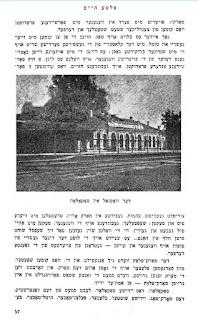 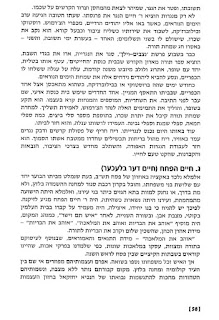 Posted by Katarzyna Markusz at 1:22 PM No comments:

In the coming months

We will be extremely busy in the coming months. We will translate from Yiddish into Polish the first part of the Memorial Book of Sokołów Podlaski thanks to the support of the Association of the Jewish Historical Institute of Poland (the cost of the project is PLN 12,000, of which the Association donated PLN 4,000) and ... surprise - we will translate a part of the Memorial Book of Węgrów from Hebrew into Polish (thanks to a private donor), which we will also publish online for free!

Do you want to support our translations? You can do it here: https://pomagam.pl/sokolowpodlaski 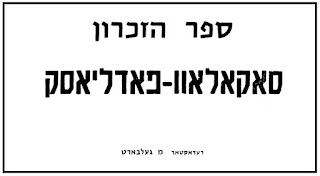 Posted by Katarzyna Markusz at 11:02 AM No comments:

Children on their winter holidays

Found in a newspaper from 1938. The picture shows children from towns where nationalists carried out an anti-Jewish boycott. The children spent the winter holidays in Otwock. The towns where the children come from are listed below the photo. 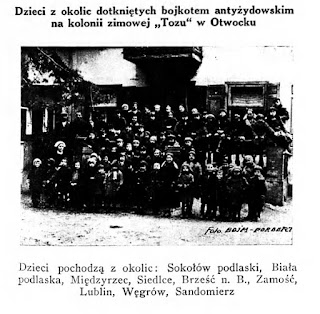 Posted by Katarzyna Markusz at 10:42 AM No comments:

Dear friends, today in my archive I came across this document. Unfortunately, I don't remember who gave it to me. Does any of you know where it comes from? I will be grateful for your help! 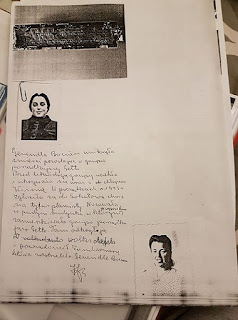 Posted by Katarzyna Markusz at 8:14 PM No comments:

A remarkable “paper monument,” the only one of its kind, is available on the internet. Almost all the historical collections held by the Arolsen Archives are now online. People from all over the world can use the online archive to access 26 million documents containing information on 21 million names* of victims of Nazi persecution. The Arolsen Archives have recently expanded the collections on the internet to include documents on forced laborers and on deportations to concentration camps. This means that the majority of the documents in the world’s most comprehensive archive on Nazi persecution are now accessible online.

*A name does not equate to a person: Some of the names of victims of Nazi persecution are found with different spellings on different documents and this led to them being counted more than once.

Posted by Katarzyna Markusz at 8:07 PM No comments:

"Aaron, tell us what your parents did before the war," Stahl asked Elster.

"They owned and operated a butcher shop," Elster said.

It wasn't the content of the interview that was so unusual.

"Where did you live?" Stahl asked.

"I was born in a small town in Poland called Sokolów Podlaski," Elster said.

It's the fact that this interview was with a man who was no longer alive. Aaron Elster died two years ago.

Posted by Katarzyna Markusz at 8:05 PM No comments:

It is an archival poster saying that Mr Szafran from Warsaw will give two lectures in Sokołów: on Sunday - June 1, and Monday - June 2 - (which means that it was in 1919, 1924 or 1930). The lectures concerned women, nation and culture. 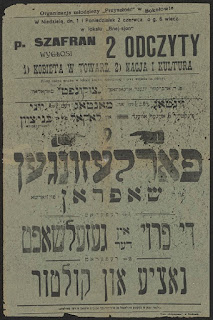 Posted by Katarzyna Markusz at 2:33 PM No comments:

Book about the Polish police during World War II

In the latest book of Prof. Jan Grabowski about the Polish police during World War II, there is also information about Sokołów, Węgrów and Siedlce. The author quotes many archival records and the book by Simcha Poliakewicz translated by us.

Grabowski's book will be published in Polish in March and in English probably next year. We encourage you to read it!

Posted by Katarzyna Markusz at 3:36 PM No comments: