A Walk in History

Let's start our walk at the old Jewish cemetery in Sokolow. You won't find any gravestones here. Now it is Polish Red Cross Park. All the matzevot were taken from here by the Germans during the Second World War. 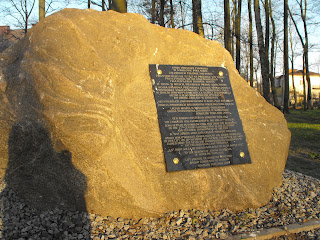 From the cemetery, we can go to Kosciuszko Street. There is a little house here that was once the wartime hiding place of children Aaron Elster and his sister, Irene. Aaron spent two years in the attic of that house with no possibility to going outside and breathing fresh air, neither was he able to take a bath or brush his teeth, or even eat a good dinner. You can read his story in a book "I Still See Her Haunting Eyes". The people who saved Aaron and his sister, the Gorski family, were honored with a Righteous Among the Nations medal in 2010.


Now let's go to Magistracka Street. Formerly, this was called Shul Street. Just before the Cetynia River, you can see an old flour mill. Nuta Gurfinkiel was the last owner of it. He probably died during the liquidation of the ghetto. When the war begun, he buried part of the manuscripts of Rabbi Morgenstern in the ground near his mill with some sugar. Unfortunately, the sugar dissolved in the rain and the manuscripts were destroyed.

The town’s mikvah, or ritual bathhouse, was located next to the river. The old building was destroyed. When we cross the river, we are at the site of the wartime ghettos. The two ghettos were divided by Sokolow’s main street - Dluga Street, a main thoroughfare for cars, tanks and people.

On Magistracka Street you can find a shopping center with pharmacy, clothes stores and cosmetics shops. If you come inside, you'll see on the floor a Star of David with inscription: "Here was the synagogue that was burnt by Germans in 1939." Another mistake - the synagogue was destroyed in late 1942 or 1943. Unfortunately, nothing is left of the old building.


Opposite the synagogue site stands the old Beit Midrash building, which has survived and was renovated by the new owner in 2011 and 2012. Of course, it is not a Beit Midrash anymore. Now houses clothes shop.

Next interesting building is the former house of Rabbi Itzhak Zelig Morgenstern. He was well-known rabbi and had many students from all over Europe in his yeshiva in Sokolow. The school was in the same building as his house. In 1939, he was very old and sick. He died in Otwock and was buried at Jewish cemetery in Warsaw. His grave (ohel) is still standing there.

Now we are on Piekna Street, one of the town’s former Jewish streets. It is also the place where you can find what I call the last Jewish grave in Sokolow. During the liquidation of the ghetto Germans killed dozens of Jews here. They were the remnant of the ghetto, young men and women left to work after the main liquidation. Their job was to sort through clothes and furniture that were left in ghetto after the liquidation and send them on to Germany or sold to local people in Sokolow. After the work was finished, they were killed and buried in this pit near Piekna Street. Survivors who came to Sokolow after the war made a concrete monument here. After a few years somebody put a plaque there with inscription: "To the victims of fascism". The monument now sits in the garden of private house. Many people in the town don't even know of its existence.

The next stop in our walk is Szewski Rynek (Shoemaker's Market). Here, there is the terrace made from gravestones taken from the old Jewish cemetery. Until recently, you could see Hebrew characters on the stones but they were covered with concrete by order of the town’s mayor in 2011 and removed 2 years later.

Next to the Shoemaker's Market is Maly Rynek (Small Market). The office of the Judenrat is here.

Nearby is another Beit Midrash, where many of Sokolow’s Jews were praying on Yom Kippur 1942. On September 22 that year, the ghetto was closed and the liquidation began. The Small Market is the place where Germans brought all Jews from the ghetto. From here they started their walk to the railway station, where they forced onto death trains bound for Treblinka and, ultimately, their murder.

There is also another Jewish cemetery near Bartoszowa Street, but it’s impossible to find without a guide. There is no plaque or sign, no matzevot are left here either. Just grass, trees, bushes and dump for trash.

Hundreds of years of Jewish history in Sokolow were obliterated by the Nazis. These few paragraphs represent only a small part of this great piece of Polish and Jewish history.

Here you can find photos taken by Nino Rodriguez during his visit to Warsaw [link]. In Warsaw he visited the grave of his great-great-grandfather Yisrael Yitzhak Rzetelny (photos #10 to #15). He was born in Sokolow Podlaski. His son, Mottel Rzetelny, left Warsaw in 1913 for the USA.

Posted by Katarzyna Markusz at 9:01 AM No comments: 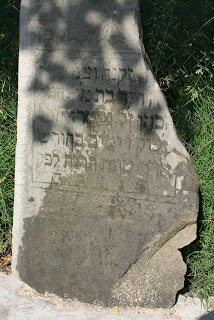 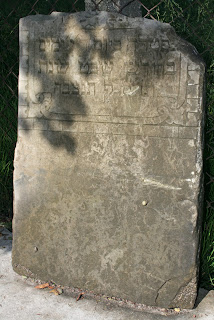 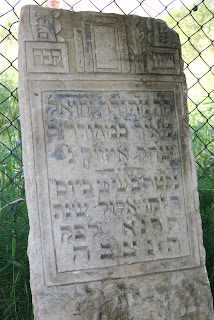