Batami Engel was a small girl when her mother was invovled in the consturction of a monument of Jews from her native town murdered during World War II. Those who had survived and emigrated to Israel would meet by the monument at the Holon cemetery every year. Year by year, their ranks shrank until there was no one on Yom HaShoah who could come to the large stone with “Sokolow Podlaski” inscribed on it. Several decades later Batami returned to the cemetery with her grandson. She and forty other people whose roots can be traced to this small town in the eastern Poland decided to resume their meetings as their parents and grandparents did. And although not all of them had ever visited Poland, it is something important for them, and what they do inspires others to engage in similar actions. 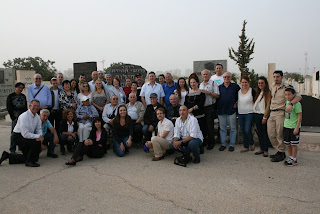 The Batami family had lived in Sokołów for generations. When I inquire about the details, instead of Batami her teenage grandson, who knows the story very well, responds. His great grandmother had decided to emigrate to Palestine even before the war. She believed that through hard work she would be able to build a new country and that it was the right place for her. Her parents, wealthy and influential town dwellers would not consent. They could not imagine living outside Poland, particularly in such a remote and unfriendly place Palestine seemed to them at that time. However, their daughter was determined to go. When she left home with her luggage, her parents informed the police that she had stolen their money and jewelry. That is how they tried to keep her in Poland. But she had put one male clothes and a cap slipped by policemen who patrolled the railway station. When the train started rolling, she changed her disguise and waved goodbye to her parents standing on the platform. That was the last time they had seen each other. 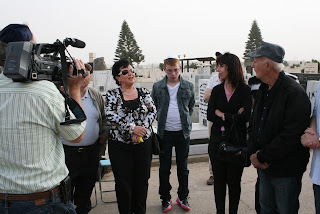 The survivors were mainly those who had managed to emigrate to Palestine or America and those who were in Russia during the war. Some of them returned to their home towns in search of any of their relatives. But hardly ever did they find anyone. “You won’t find anything here any more. Leave this place”, was the advice the Jewish Holocaust survivors heard. And so they did. They would leave, first to Łódź, and later to Palestine or the United States. Behind they left their home towns, because no one waited for them any more. They abandoned their former life and started a new one in a different place. But they could not forget about their families, their neighbors, the people they had seen every day in the street, and whom they would have no chance of seeing again. That is why monuments of Jews from individual towns who had been murdered by the Germans were erected. At he Holon cemetery in Israel, Batami's mother was involved in such a project.

For years the survivors would meet by this monument, but from year to year there were fewer of them. Finally nobody would come. No one would light a candle, no one prayed, no one read out the names of their relatives. The monument stood there on its own, and life went on at its own pace. This began to change a few years ago. Shoshi Shatit, whose father had been born in Sokołów, decided to find out more about her roots and the town where her family had lived for many years. Initially, her inquiries arose astonishment among her relatives, as they took up a lot of her time and there was no way of knowing the result, and her first trip to Poland turned out to be disappointing. “There was nothing there. Nothing at all”, Shoshi recalls. 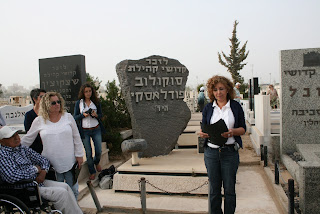 Shoshi was not the only person to look for information about her father’s home town. It turned out that there many more such people. They are bound by the common past of their ancestors who had been their neighbors. Today, even though they live in different countries they try to rebuild this community that bound their parents and grandparents. They meet, exchange information, revive memories of a world that will never come back. When they look at it, Shoshi’s friends themselves are taking interest in their family history. And they start their inquiries.

Batami was a small girl when she visited the Holon cemetery for the last time. On 8 April 2013, on Yom HaShoah, she came here for the first time after many years. She brought her grandson, who knows the family history very well. Apart form them another forty people came, whose family history can be traced to Sokołów Podlaski. They came here because memory is a very important part of their identity. They brought their children and grandchildren so that they could also cherish this memory.

“Today is the day when we want to say that we remember the 6 million of Holocaust victims, particularly the six thousand from Sokołów Podlaski”, said one of those who came to the cemetery. “We remember their death in the ghettos, camps or on the streets of Polish towns. But this cannot be the only thing one can say about a person - that they died. Because life is most important. What you do shows how much you want to find out more about the life of your ancestors, not only about their death. And this is something we’ll never forget.”

At the Holon cemetery, on Yom HaShoah, they gather by symbolic tombstones dedicated to people from a given locality. There are still many monuments there which nobody visits...