Translation of another book about Sokołów

We are still working on in but I wanted to share it with you.

The pain of Jewish history is reflected in the Yiddish language, in which memorial books of many Polish cities and towns were written after the war. This year, the Gszarim Foundation translated into Polish a second such book on the history of Sokołów Podlaski, a small town located east of Warsaw. Below is one of the chapters of this publication in English. The whole text (in Polish) is available at sokolow.jewish.pl. 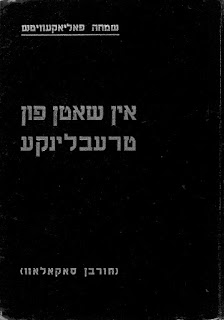 Sokołów – my home town, Sokołów – my cherished Jewish town! You were the center of my world. There may be other cities in the world, but none of them is as big and as beautiful as you are. Nowhere in the world is there such a river as you have, although it does not even have the name [*actually a reference to the Cetynia]. Nowhere are the meadows as green as in Sokołów and nowhere in the world are such orchards, where you can walk so blissfully. Sokołów had a beautiful synagogue [*at today’s Magistracka Street, formerly Bóżnicza Street] in which we held our heads high trying to see through colored glass over Aron kodesh [*receptacle used to store Torah scrolls] and see the play of lights there. In the middle of the square in Sokołów there was a well, and when I was a child, it was like a magical machine that pulled water from the depths of the earth. There was even so much beauty in the fires that frequently broke out in Sokołów, as they stirred up children’s imagination and carried them into the world of great emotions. Even the fairy tales that we later read could not tell us as much about mysterious worlds as tales we heard from tinsmith Yone. Sokołów was the center of my world and everything that was most beautiful and interesting took place in this city.

I have been to many cities in Podlasie. I could have visited Sokołów ten times already but I never did it. I was afraid to see my town without the Jews.

In the end I came to Sokołów one summer morning. The town square was empty, the stalls closed. The walls, the stands on the market – as a child I thought that nowhere in the world are they bigger than in Sokołów – and now they looked tiny and miserable. That misery – so well known to me, so close. It seemed to me that the houses were also looking at me with their big windows, in which the rising sun was reflected. They probably recognized me, just as I was recognized by the well on the square, whose heavy iron handles I could never lift when I was a child.

No one went to the synagogue to pray. I could not see the shutters opening in the morning nor any peddlers going to the market with baskets full of vegetables sold to hard-working Sokołów housewives.

I walk through the well known empty streets and I do not meet anyone. Somewhere the door opens and some hands pour water from the bowl onto the pavement. The door closes before I can see the face. I find the testimony of the Holocaust in the new Besmedresh. Glass panes knocked out, walls covered in soot. I go down the street towards the river. Many wooden houses are sunken, many demolished. They are replaced by new ones. My childhood world does not exist anymore.

The old cemetery is also destroyed. Now it is a large overgrown yard. At the bridge I can hear the mill that was once a Jewish mill. Then the sounds of a smithy, once owned by a Jewish blacksmith. And now a goy blacksmith is looking at me. He is probably surprised and wonders what a stranger is doing here at such an early hour. Further up the street, towards the market square I find a destroyed synagogue and the new Besmedresh, miserable and vandalized. When I come back to the market square, a few stalls are already open, with unfamiliar faces in them.

There are no more Jews in the Jewish town of Sokołów.

Clerks, policemen and strangers enter the rabbi’s house [*the rabbi’s house was located at the beginning of Piękna Street; now there is a restaurant there]. There are now municipal offices that have nothing to do with Jews.

And once this house was the center of the world for us. The Sokołów rebbe Icchok Zelig Morgensztern, the grandson of the rebbe from Kock, reigned over Podlasie like a monarch. From the remotest towns, women with children came as well as the sick to ask the rebbe for healing. And he, like an experienced doctor, asked the patient about symptoms and afflictions and wrote prescriptions in a bizarre language that only the pharmacists in Sokołów were able to understand. The Sokołów rebbe was an amazing figure. A man of great temperament and a connoisseur of people. He never took care of his children, he never knew how many young men were studying in his yeshiva, how many Jews lived in the town. But he knew everyone very well and he had the right opinion about each of them. He liked gifts, but he did not care much about the money he had. So the old shames [*janitor responsible for preparing the synagogue for services] followed the rebbe and collected coppers that fell out of his pocket.

The Sokołów Jews were healthy, hardworking people, craftsmen and merchants, who only allowed themselves a one-day rest from work. They were also people of great faith. Sometimes they might be short on bread but they always had more than enough work and faith . However, in spite of this extreme poverty, Sokołów gave the world intellectuals, poets, writers, scholars and teachers, who are now scattered all over the world. In this small town all social and political fights and disputes took place on the Jewish street. When the conflicts between the Chassidim from Kock, Aleksandrów and Góra Kalwaria came to an end as there were no new Chassidim in the city, the clashes of secular parties began: Bundists, Zionists and communists. They were as fierce as the Jews from Sokołów. In the evening meetings, in the orchards, where people walked and among members of various associations, ardent discussions took place. It was like the dawn of a new world order.

However, the youth of Sokołów did not live to see such a new order. When it came, it immediately fell into a snake nest, which had already been poisoning Jewish life and which later tried to get rid of the Jews under the German command. Since then we have been exposed to savage anti-Semitism. The townsmen, Sokołów shoemakers and firefighters were only looking for an opportunity to “play” with the Jews. They got their chance on the first day after the Germans seized the city. Even then, before those criminals started murdering Jews, the Sokołów townsfolk robbed and murdered people. A dark storm passed over Sokołów. When the Jews fled to the Bug River in order to save themselves, peasants robbed them and murdered them along the way.

Take a walk along the streets of Sokołów. You will pass women wearing clothes that you know had belonged to Jews. Curtains in windows, equipment in shops – all Jewish. What was not stolen from the Jews, people later got from the Germans. They call all loot “post-German things”. The houses where Poles live are not Jewish but “post-German” because the Germans wanted to sell them.

In every city I visit, I ask the local photographer if there are any photos from the time of the occupation. Here, in Sokołów, I did not even dare. I did not want even the slightest suspicion that I had something to do with Jews or that I was interested in them….

I did not want to add another miserable grave to these Jewish graves scattered around the surrounding fields and forests. I also wanted to see how the city, which was the center of my world as a child, looks like now. I did not believe then that there was any other place in the world better than here. And I saw it, so miserable, so cruelly destroyed. As soon as the bus to Wegrów came the ground started to burn under my feet and I left Sokołów. I left it forever.


“In shotn fun Treblinke” (“In the shadow of Treblinka”), Simche Poliakewicz, translation to Polish Agata Kondrat; translation to English Katarzyna Gucio. The project is co-financed by the Jewish Historical Institute Association, the Museum of Polish History in Warsaw as part of the “Patriotism of Tomorrow” Program and from donations made by Internet users. Idea and coordination by Katarzyna Markusz.
Posted by Katarzyna Markusz at 3:06 PM